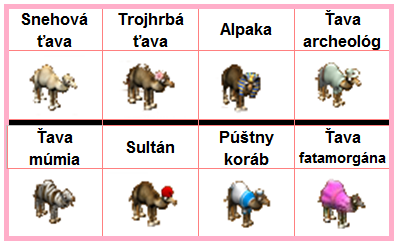 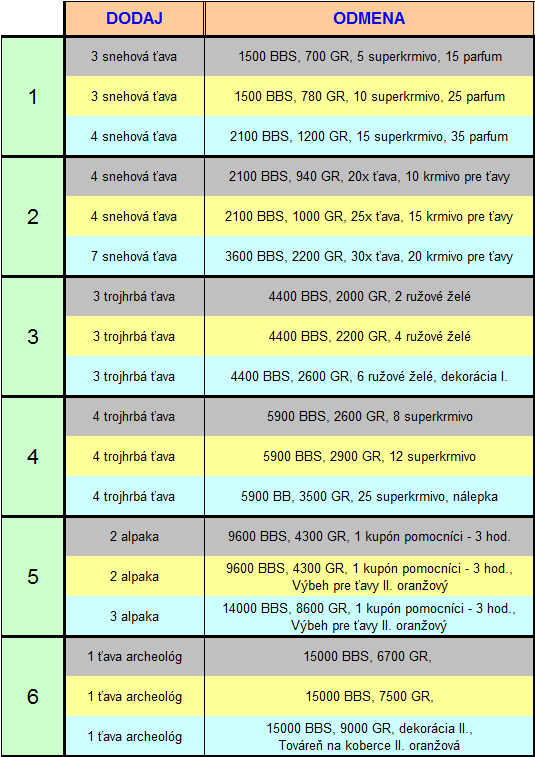 It's like something out of a fairy tale! The camels have discovered a mysterious lamp. Is it the magic-type that grants wishes? Find out in the new Farmers' Society quest chain, "Three Wishes"! You don't need a magic genie to get in on this fun. Crazy camels and impressive prizes await! Play now!

1. Whoops-a-daisy! "What's that sticking out the ground?" the snow camel wonders. It looks like...a magic lamp! "I'm soo thirsty. A nice, cool drink would hit the spot," thinks the camel as it begins to lick the lamp. At that very moment, it starts raining!

2. It IS a magic lamp! With great care, the snow camel picks it up. The shiny object attracts a crowd of camels curious to see the lamp perform another miracle. Naturally, some of camels remain quite skeptical.

3. Most skeptical of all is the trimedary. It nuzzles the lamp and makes a wish, "I'm hungry!" Before it could even close its mouth, the food wagons from the weekly market roll by. The camels gasp in unison, "It works!"

4. The trimedary calls the camels to gather around. "This is a huge discovery. Let's keep it between us camels so that the other animals don't steal our wishes!" The other camels nod in agreement.

5. "What's this I hear about a magic lamp? There's no such thing!" says an alpaca pushing its way to the front of the herd. "You're not even a camel!" retorts the trimedary. The alpaca simply rolled its eyes and said, "Follow me..."

6. The alpaca leads the group through the market. Finally, they reach the kamaeologist's booth. "Oh I see you found one of my hand-crafted gravy boats! Would you like to buy another?" the kamaeologist asks, pointing to a table filled with identical "lamps". How embarrassing!

Who says you have to go to the desert to see gracefully galloping camels? With the new camel breeding feature, you can raise a whole herd of humpbacked friends and much more! Colorful pen upgrades! A carpet factory with flying carpets! New camel types like snow camels, alpacas, and trimedaries! Two new quest trains with tons of camel fun and prizes! Play now and become a master camel breeder!

1. Calling all camel breeders! Now there are plenty of new and cute types of camels for you to enjoy. Take a look for yourself!

2. Would you take a look at that! It's a snow camel! This breed was recently discovered and is as much at home in the desert as the arctic region. Is there anything it can't do?

3. Things are starting to shape up! Plenty of camels to go around, not enough for a caravan, but you're on your way. Look at how well everyone is getting along!

4. They say that three is the magic number, but have you ever seen a camel with three humps?! Move over, dromedary, here comes the trimedary!

5. Who's that fuzz ball over there? It's an alpaca! Don't let it pull the wool over your eyes, it's also a member of the camel family. How neat is that?

6. The camaeologist is an expert excavator. It has all the right tools to discover lost artifacts and ancient civilizations!

7. Look out behind you! The mummy camel has tumbled right out of its sarcophagus and on to the farm. It might not be so steady on its feet, but it always has a bit of extra tissue in case you get the sniffles!

8. Experience the thrill of 1,001 Arabian nights with the sultan camel! If you play your cards right, it might just reveal the secret of the genie in the bottle and treasures galore!

9. "Yo, ho, ho, and a bottle of sand!" Those are the little-known lyrics to the song of the desert ship camels! Sand dunes, ahoy!

10. Rub your eyes all you want, you're not seeing things. The mirage camel is a master of illusion, the likes of which the farm has never seen! Ready to go on a magical, mystical carpet ride? Whoops! Now you see it, now you don't!

1. If you're ever in need of a flying carpet, go see Camelita. Her woven rugs are a big hit all over BAHAMARAMA and beyond. They fly higher and more smoothly than any others, a fact that makes Camelita proud!

2. "Heelllp!" Camelita hears someone calling for help. Who could it be? She turns her head to investigate. The cries are coming from the volcano! Thinking quickly, she decides to leave her loom and head over to towards the pluming volcano smoke.

3. It's the famous explorer, Catsylvania Jones! Camelita spots him from above, perched on a narrow ledge. The bubbling lava is precariously close to him. Unrolling one of her flying carpets, she sends it to fetch Catsylvania. This might just be crazy enough to work!

4. Whew! What a close call! A slightly singed Catsylvania expresses his thanks and explains, "I've been tracking down the ancient Golden Banana Peel. It's like a divining rod, but for golden bananas! I'll find all of their secret hiding places!"

5. "Are you up for an adventure?" Catsylvania asks Camelita. "According to the legend, Golden Banana Peel is hidden somewhere up high. Maybe we can use your flying carpet!" "Have you checked the Magic Stalk?" Camelita asks.

6. "Let's go!" exclaims Catsylvania. However, on their way towards the Magic Stalk, the pair encounter a storm. The thin carpet shakes about and Catsylvania loses his grip on the tassles. It's up to Camelita to save him again!

7. In a flash, Camelita swoops downward on her flying carpet and catches Catsylvania just in time. "Looks like I owe you another one!" Catsylvania meows. Unfortunately, the Golden Banana Peel was nowhere to be seen.

9. As the two approach, it suddenly becomes clear that it was just a toolbox gleaming in the sun. "Aw, it's not so bad. Think of what you could do with this toolbox." Camelita's kind words lift the explorer cat's spirits.

10. Even though the adventure was fun and exciting, Camelita decides to return to weaving. Before she turns around to head home, she presents Catsylvania with her flying carpet. As he prepares to take off, he thanks his camel friend once again and flies off in search of the Golden Banana Peel!